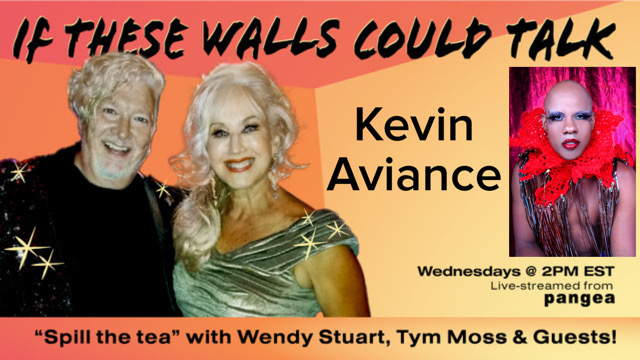 Who else but hosts Wendy Stuart and Tym Moss could “spill the tea” on their weekly show “If These Walls Could Talk” live from Pangea Restaurant on the Lower Eastside of NYC, with their unique style of honest, and emotional interviews, sharing the fascinating backstory of celebrities, entertainers, recording artists, writers and artists and bringing their audience along for a fantastic ride.

Kevin Aviance will be a featured guest on “If These Walls Could Talk” with hosts Wendy Stuart and Tym Moss on Wednesday, March 9th, 2022 at 2 PM ET live from the infamous Pangea Restaurant.

Wendy Stuart is an author, celebrity interviewer, model, filmmaker and hosts “Pandemic Cooking With Wendy,” a popular Youtube comedic cooking show born in the era of Covid-19, and TriVersity Talk, a weekly web series with featured guests discussing their lives, activism and pressing issues in the LGBTQ Community.

The subculture of fabulosity was born in the body and sound of queer culture idol–the legendary Kevin Aviance. From global drag performance artist to DJ to Fashion Designer to Pop Artist this multi-hyphenate has got it going on. And that is what makes Aviance a beacon of black excellence and inspiration for today’s youth generation.

Kevin Aviance is a bonafide icon and talked about everywhere. With four #1 Billboard dance hits, over 10 groundbreaking music videos and a fan base stretching from New York to Tokyo, this is a style icon that continually breaks new ground and is admired for his gender fluid avant-garde fashions, his award-winning pop art, iconic dance and music performances in the international dance music scene, and his proud presence, all of which have made him a huge star in LGBTQ+ circles around the world.

His debut album, Box Of Chocolates (Wave Records) introduced Kevin’s signature sound with the club hit, Cunty, recently covered by Aviance favorite–Jennifer Lopez. He has performed alongside the late Whitney Houston, Cher, Lil Kim, Mary J. Blige, Natalie Cole, Cyndi Lauper, Janet Jackson, Bette Midler, and was featured in Madonna’s Secret video, where once again Kevin had all eyes on him. Kevin has also appeared in major films and is on regular rotation on network talk shows, and reality series.

He has collaborated with DJs and producers that have become some of the most anticipated club nights in decades–including Junior Vasquez, Victor Calderone, Basement Jaxx, Deep Dish, François Kevorkian, DJ Gomi, Danny Tenaglia, Tom Stephan, Johnny McGovern, the late Ari Gold, Grammy Award-winners Peter Rauhofer and Hex Hector and two-time Grammy nominated Tony Moran on his sophomore album Entity which spawned two #1 dance hits, Alive and Give It Up.

What’s new and next for Kevin Aviance? BTYKWN of course, so hold on to something, darlings. You’re about to get into it.

Watch Kevin Aviance on “If These Walls Could Talk” with hosts Wendy Stuart and Tym Moss on YouTube here:

Subscribe and listen to “If These Walls Could Talk” on Apple Podcasts/iTunes here: