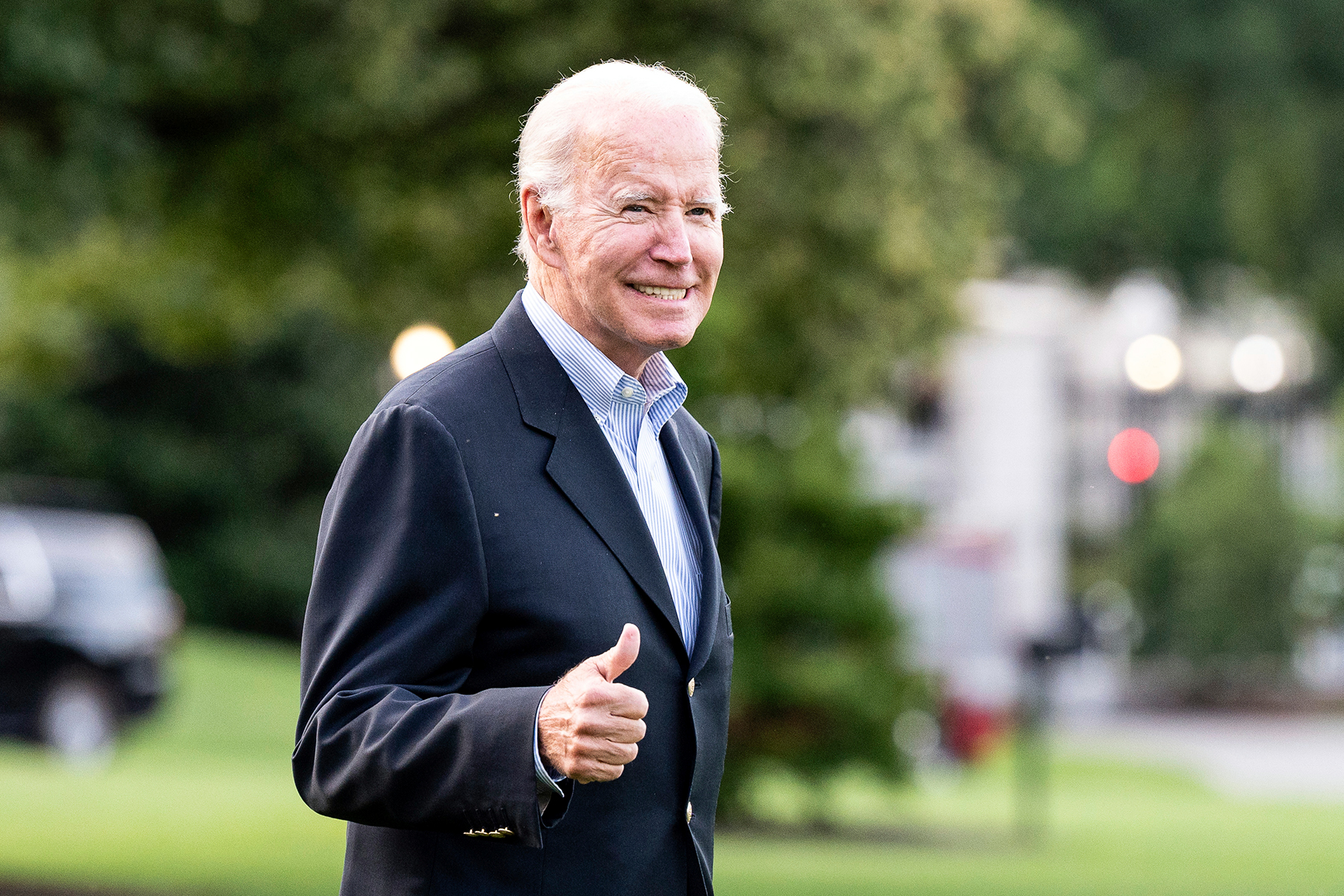 If you spend any significant time online — and particularly in the nebulous, insufferable realm of Politics Twitter — you’ve probably met him: 79-years-old, a full head of silver hair, an immaculately tailored suit, and, frequently, a pair of sizzling red laser-eyes. He’s “Dark Brandon,” President Joe Biden’s alpha-male bizarro, and the latest star of the White House’s ham-fisted effort to convince people that the septuagenarian commander-in-chief is actually a Super Cool Badass Dude™.

Dark Brandon is crushing it pic.twitter.com/w0L8xCzIW8

In reality, the meteoric rise of the Dark Brandon meme — a liberal effort to reclaim the already-lame “Let’s Go Brandon” shibboleth popular among MAGA conservatives — is a cautionary tale. With a distinct air of “How do you do, fellow kids?,” the White House officials and allies sharing the meme are effectively distracting from the actual substance of a newly passed bill that will genuinely help people. Dark Brandon’s roots in Chinese propaganda and distinctly alt-right aesthetics only further draw attention away from the very thing the meme was deployed to celebrate.

That’s obviously not what the Dark Brandon tweeters are going for. In the Biden-stan circles where Dark Brandon currently frequents, he’s a master tactician who cottons no bullshit while crushing Republican obstruction with ruthless efficacy. He’s a way for die-hard Democrats to claim they’d been right about Biden all along, while simultaneously serving as a fantasy stand-in for the embattled president we actually have.

With its purported origins as a 2020 anti-government piece from a Chinese artist who depicted a satanic Biden lounging on a throne of guns in hell, Dark Brandon’s journey from Asian social media to official White House messaging is the perfect encapsulation of an internet meme’s all-too-short lifespan. In a matter of months he’s gone from viral, nihilistic jokes to dull propaganda; from organic, irony-soaked shitposting to an astroturfed marketing ploy. The moment administration staffers and their congressional allies started sincerely sharing Dark Brandon images to celebrate a sizable legislative win, they themselves killed whatever semi-legit cache the meme may have once had.

Broadly speaking, memetic politics — and particularly memes designed to venerate a single person — is an awkward proposition to begin with, and one at which conservatives have proven themselves more adept over the past few years. Right-wing platforms like Truth Social and Gettr are full of homages to the “Great MAGA King” Donald Trump and other “Ultra MAGA” figures. It’s awkward and lame, but among Trumpian true believers, edgelord malcontents, and the former president’s painfully too-online son, these sort of memes have genuine cache. Conversely, to the extent that Democrats have been able to successfully capitalize on political memes of late, it’s been in instances where the joke is directed outward at a foil, like John Fetterman’s masterclass in trolling Dr. Oz, rather than for self aggrandizement, which Democrats are, frankly, not good at.

With Dark Brandon in particular, that awkwardness is exacerbated by the meme’s overtly — if sometimes inadvertently — authoritarian “fashwave” aesthetic of glitchy laser eyes, and strongman posturing. Despite the protestations of artist Tobin Stone, whose Batman-inspired Dark Brandom meme was shared by White House Deputy Press Secretary, it’s fairly easy to see why the meme’s imagery was quickly mistaken for something much more sinister. (“The eagle is not, and was never intended to be the reichsadler — it was just intended to be a representation of America’s national bird, the bald eagle, and any reasonable person would interpret it as such” Stone told the Daily Dot.)

To be clear, there’s nothing expressly bad about Dark Brandon and his newfound mainstream popularity. At least, not in and of itself. As Mother Jones’ Ali Breland mused, the White House deploying him as an official mascot of sorts could ultimately serve to defang some of the prickly aesthetic appeal found across much of the hard right’s digital ecosystem.

Maybe, but the larger question here is: Who is this for? Or perhaps more acutely: What’s the point? Democrats are obviously anxious to tout their accomplishments as they face the headwinds of a potentially ruinous midterm election, but the abrupt pivot to Dark Brandon memes feels both forced and premature. By placing the emphasis on Biden himself, the meme obscures the actual policy accomplishment it’s meant to celebrate. What’s more, with Biden not even running for another two years, Dark Brandon only distracts from the Democrats who are in an election year scramble to retain their tenuous grip on congress. Instead of trumpeting the largely positive features of the bill — and the lawmakers who carried it over the finish line — the meme feels like hollow chest thumping without context or a sense of gravity. Glib, valorating ephemera is hardly the victory lap the Dark Brandon enthusiasts seem to think it is.

Notching a legislative win like the Inflation Reduction Act is worth noting and capitalizing on, but Dark Brandon just isn’t the guy to do it. If Biden’s legislation manages to actually help the Dems through the midterms without giving up too much, then maybe, maybe, he’ll be ready for the limelight. For now, though, despite his laser eyes and tough guy demeanor, Dark Brandon is old, he’s tired, and it’s time for the White House to give him, and us, a rest.

Labour to fight back against Trussonomics tax giveaways at party conference
New York’s Cannabis Bill Could Set the Trend for Social Equity, but Uncertainties Remain
Protests in Iran By Howard Bloom
Foo Fighters Open Taylor Hawkins L.A. Tribute Show With Joan Jett
Chapel Hart Make Opry Debut With Performance Of “You Can Have Him Jolene”