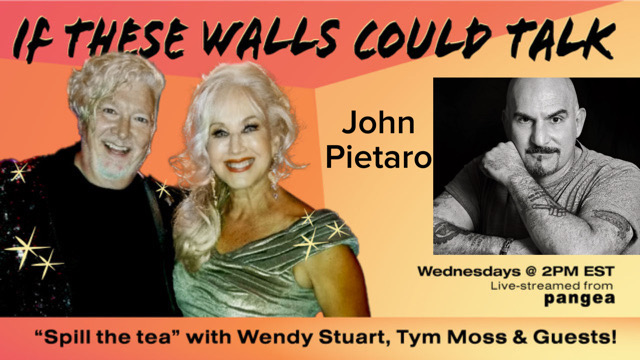 Who else but hosts Wendy Stuart and Tym Moss could “spill the tea” on their weekly show “If These Walls Could Talk” live from Pangea Restaurant on the Lower Eastside of NYC, with their unique style of honest, and emotional interviews, sharing the fascinating backstory of celebrities, entertainers, recording artists, writers and artists and bringing their audience along for a fantastic ride.

John Pietaro will be a featured guest on “If These Walls Could Talk” with hosts Wendy Stuart and Tym Moss on Wednesday, August 24th, 2022 at 2 PM ET live from the infamous Pangea Restaurant.

Wendy Stuart is an author, celebrity interviewer, model, filmmaker and hosts “Pandemic Cooking With Wendy,” a popular YouTube comedic cooking show born in the era of Covid-19, and TriVersity Talk, a weekly web series with featured guests discussing their lives, activism and pressing issues in the LGBTQ Community.

JOHN PIETARO is a writer, poet, spoken word artist and musician from Brooklyn, NY.  Pietaro’s latest work is the poetry/fiction collection A Bleeding in Black Leather (MD: Uncollected Press, 2022). In 2020, his The Mercer Stands Burning: Night Poems was published by Atmosphere Press, and in 2019 poetry chapbook Smoke Rings was launched. Earlier, Pietaro penned contemporary proletarian fiction collection Night People & Other Tales of Working New York (2013) and contributed a chapter to Paul Buhle and Harvey Pekar’s SDS: A Graphic History (NY: Hill & Wang 2007). He also wrote multiple entries for the upcoming edition of The Encyclopedia of the American Left (Verso) and is deep into first novel Of Seconds and Shadows.

Columnist/critic of The NYC Jazz Record, Pietaro is a contributing arts reporter to PleaseKillMe, The Wire (UK), Z, Sensitive Skin, AllAboutJazz, The Nation, The Village Sun, Counter Punch, People’s World, TruthOut and others, and his poetry or fiction has appeared in numerous international anthologies and journals. He was also among the honorees at the New York Press Association 2021 “Better Newspaper” awards ceremony for his obit of drummer Deep Pop in The Village Sun.

Pietaro founded the annual BRECHT LIVES! Festival (NYC), hosts radio shows ‘Beneath the Underground’ (WFMU) and ‘Jazz Just After Dark’ (makerparkradio.nyc), and fronts post-punk jazz/poetry ensemble the Red Microphone, recording artists of the ESP-Disk label. The band’s latest album, A Bleeding in Black Leather will drop August 2022. And I Became of the Dark was released in May 2021, and previously the Red Microphone collaborated with poet/activist Amina Baraka for Amina Baraka & the Red Microphone (ESP-Disk, 2017). Ms. Baraka also performed Pietaro’s “Her Side of the Road” as a dramatic reading in 2018.

Watch John Pietaro on “If These Walls Could Talk” with hosts Wendy Stuart and Tym Moss on YouTube here:

Subscribe and listen to “If These Walls Could Talk” on Apple Podcasts/iTunes here: