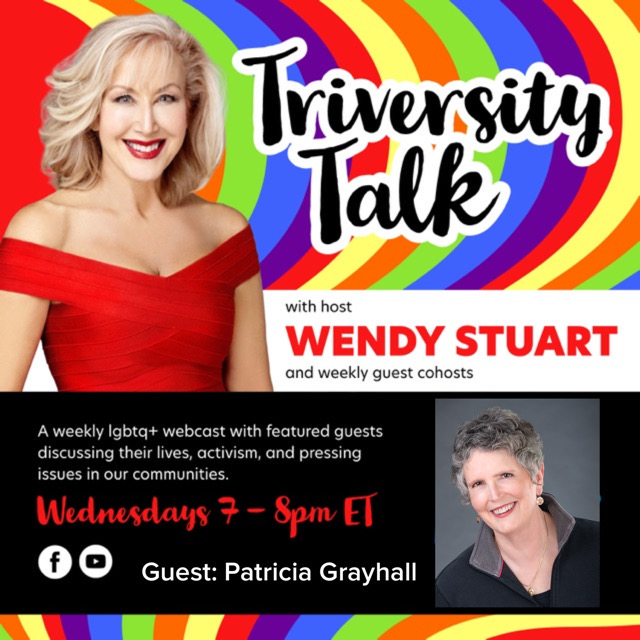 TriVersity Talk! is a weekly web series with featured guests discussing their lives, activism and pressing issues in the LGBTQ Community. With TriVersity Talk!, the goal is to laugh and learn.

Patricia Grayhall is a medical doctor and author of Making the Rounds; Defying Norms in Love and Medicine as well as articles in Queer Forty and The Gay and Lesbian Review. After nearly forty years of medical practice, this is her debut, very personal, and frank memoir about coming out as a lesbian in the late 1960s and training to become a doctor when society disapproved of both for a woman. She chose to write using a pen name to protect the privacy of some of her characters as well as her own.

Patricia lives with the love of her life on an island in the Pacific Northwest where she enjoys other people’s dogs, the occasional Orca and black bear, hiking, and wine with friends.

About the Book: Defying expectations of a woman growing up in Arizona in the 1960s, Patricia Grayhall fled Phoenix at nineteen for the vibrant streets of San Francisco, determined to finally come out as a lesbian after years of trying to be a “normal” girl. Her dream of becoming a physician drew her back to college, and then on to medical school in conservative Salt Lake City.

Though Patricia enjoyed a supportive friendship with a male colleague, she longed for an equal, loving relationship with a woman. But her graduate medical training in Boston, with its emotional demands, long hours, lack of sleep, and social isolation, compounded by the free-wheeling sexual revolution of the 1970s, made finding that special relationship difficult. Often disappointed but never defeated, Patricia—armed with wit and determination—battled on against sexism in her male-dominated profession and against discrimination in a still largely homophobic nation, plunging herself into a life that was never boring and certainly never without passion.

A chronicle of coming of age during second-wave feminism and striving to have both love and career as a gay medical doctor, Making the Rounds is a well-paced and deeply humanizing memoir of what it means to seek belonging and love—and to find them, in the most surprising ways.

The official website for the TriVersity Center may be found at https://www.triversitycenter.org

Subscribe and listen to TriVersity Talk! on Apple Podcasts/iTunes here:

How to Help Hurricane Ian Victims in Florida, Puerto Rico, Cuba, and Dominican Republic
See Lea Michele Sing ‘People,’ Talk ‘Funny Girl’ on ‘Fallon’
Nations demand urgent meeting with Kwarteng as Tory top team doubles down on plan to cut spending
Microsoft Confirms 2 New Exchange Zero-Day Flaws Being Used in the Wild
An entire seafront levelled – no one expected Hurricane Ian to be so vicious and so damaging