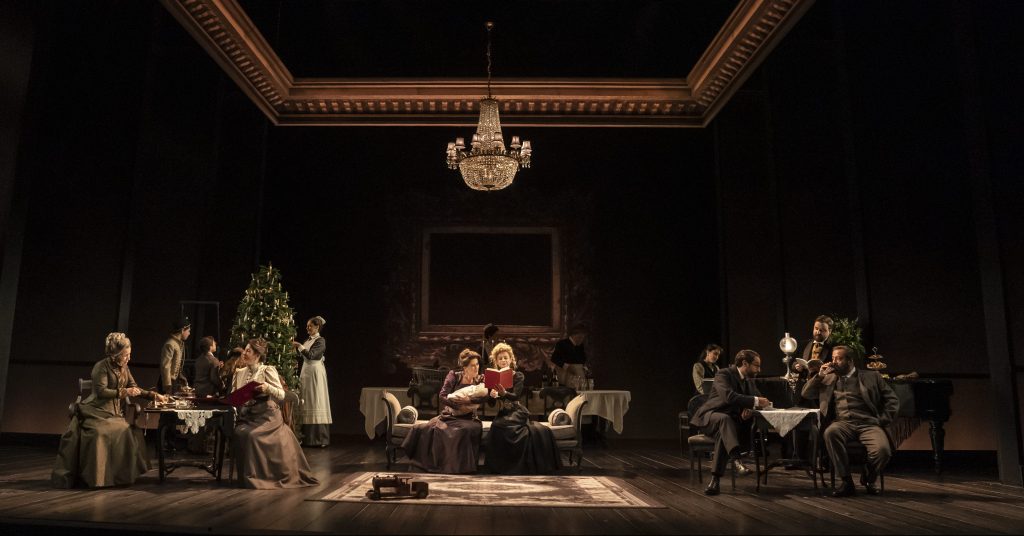 The great playwright Tom Stoppard and his simpatico director Patrick Marber make a lasting gift of remembrance in the brilliant, gorgeous and devastating new play Leopoldstadt, opening tonight at Broadway’s Longacre Theatre. But it’s a gift that comes with strings, ropes even, the author seems to be warning us: There’s burden attached to memory, and pain, and, above all, responsibility – duty, even – that accompanies every yellowed snapshot in an old family album and every fading face that once seemed fixed with such clarity.

Most of us, thankfully, won’t have the unbearably catastrophic history to carry through life that the youngest of Leopoldstadt‘s characters are ultimately left with. When we reunite with them at the end of the play, in 1955, their numbers dwindled to three, the survivors of Hitler’s campaign to eradicate Europe’s Jews are all that’s left of the once expansive family we’ve come to know in the previous hours.

When we first encounter, in 1899, the extended family of Hermann Merz (David Krumholtz), its members are as grand and sophisticated as the gorgeously appointed Old World drawing room in Vienna. One of those appointments of set designer Richard Hudson’s detail-perfect surroundings is a lovingly decorated Christmas tree – a nod to the Catholics who have married into this otherwise Jewish family and, perhaps more tellingly, to those Jews – Hermann, especially – who believe that the days of separatism are history, that full assimilation of Jews into the Austria they’ve long called home is at hand. Hermann, unlike his more politically astute and analytical brother-in-law Ludwig (Brandon Uranowitz), has no use for radical talk of a Jewish homeland in some godforsaken desert, and places his trust in such social markers as wealth, connections, participation in the high culture and genteel (and gentile) society that so clearly separates, spiritually and otherwise, the world-class city of Vienna from its old Jewish ghetto district of Leopoldstadt.

History has informed the audience that Austria won’t so easily shed its Leopoldstadts, and Hermann’s dreams of assimilation are delusions, that wealth and civic-mindedness and politesse will come to nothing in just a few short decades, when a simple, loud knock at the door will have this beautiful family frozen in terror, the only word capable of expressing what they see outside being a panicked whisper “trouble.”

Stoppard and Leopoldstadt take their time getting to Kristallnacht, though, providing us with many, many snapshots of this family as it grows, develops and lives and dies in the years between Hermann’s doomed optimism and the violence that comes calling in 1938.

An outline of the four scenes that follow the 1899 introduction will be as reductive in personal detail as the family tree that is occasionally projected onto a scrim, but might serve as a helpful throughline:

A year after our introduction to the family, we watch as Stoppard zooms in on one of the personal stories among the family members, in this case a brief infidelity by Gretl (Faye Castelow), the Jewish Hermann’s Catholic wife, with a handsome caddish Austrian officer whose anti-Semitism and cruelty will become all too apparent when he meets Hermann. Gloating, the officer casually crushes Hermann’s naivete, if not his spirit.

Gretl’s tryst will have ramifications in the years to come, though not in ways the characters – or the audience – might predict. When we next see the family, it’s 1924, and the various aunts, uncles, cousins and grandparents – Jews and “papists” both – have gathered for a Briss. There have been casualties of the Great War – one grandson is missing, and Jacob (Seth Numrich), the son of Hermann and Gretl, has lost an arm and an eye to battle. As in the previous scene, an outsider brings an ominous mood: The young banker who arrives to meet with Hermann regarding some family business gives voice to the nationalist sentiment that will soon enough change history.

And that history arrives with full force in the next scene: It’s 1938, and the family – children now adults with children of their own, the patriarchs and matriarchs now grown old – is gathered in the once opulent, now spare, apartment (Hudson’s set is a storyteller in itself), trying to make sense of the chaos outside and desperate to plot a course of action. Even now, amidst the sounds of screams and shattering glass – tonight is Kristallnacht – the family is divided as to whether to leave Austria (they still believe they can) or ride out what some of the elders believe to be just the latest in a long line of struggles. A newcomer to the gathering – a British journalist (Numrich, again; many in the cast portray more than one character) who has fallen in love with the young widow of that WWI casualty – warns of horrors unimaginable, horrors that even now seem unthinkable to most, at least until the Nazis to take names, loot possessions and make the decisions that will send each family member on their own particular path to hell.

The results of those decisions are made evident in the final scene, when, in 1955, only three members of the family survive and have gathered in the apartment – how the apartment is returned to the family won’t be spoiled here. Rosa (Jenna Augen), whom we first met as a little girl, is now the family elder, having moved to New York City prior to the Holocaust. Her nephew Nathan (Uranowitz) is the lone family survivor of Auschwitz, and cousin Leo (Arty Froushan), the London-raised son of the war widow and stepson of that British journalist, seems to have no memory of his Viennese childhood, or, for that matter, his Jewish heritage.

Indeed, Leo’s callow disregard for history is, Stoppard could be saying, history itself’s last laugh on the hopeful dreams of assimilation expressed by Hermann a half-century before, the cost of acceptance equal to the steep price of willful ignorance. It will be up to Rosa and Nathan to remind Leo of his past, of history, and of those that paid the price for ability to forget.

Any summary of scenes and timeline descriptions of Leopoldstadt can’t begin to convey the richness of Stoppard’s work, and this play, like his other masterworks Arcadia and The Coast of Utopia, is full of digressions and discussions and dialogue as funny as it is poignant. Mathematics, not surprisingly, comes into play, as it so often does with Stoppard, but so too does Zionism and modern art and so many other aspects of 20th Century political history that Leopoldstadt can at times seem like a right and proper companion piece to Ken Burns’ wonderful The U.S. and The Holocaust documentary.

If Stoppard sacrifices audience connection with any particular character – just as we’re getting to know one generation, a new era arrives – he compensates by etching a family history so sprawling and compelling that we embrace it even as we struggle with the details. (You’ll be mentally tracing this family tree long after the play’s end.) An excellent cast of 38 – 38! – delivers each character with enough individual personality to guide us along the way, even if we’re not always immediately cognizant of how one person might be related to another. Naming specific actors seems churlish with a sprawling cast this good, but nonetheless: In addition to the ones already named in this review, there’s Eden Epstein, Caissie Levy and Aaron Neil turning in remarkable performances, giving life to characters that demand to be remembered.