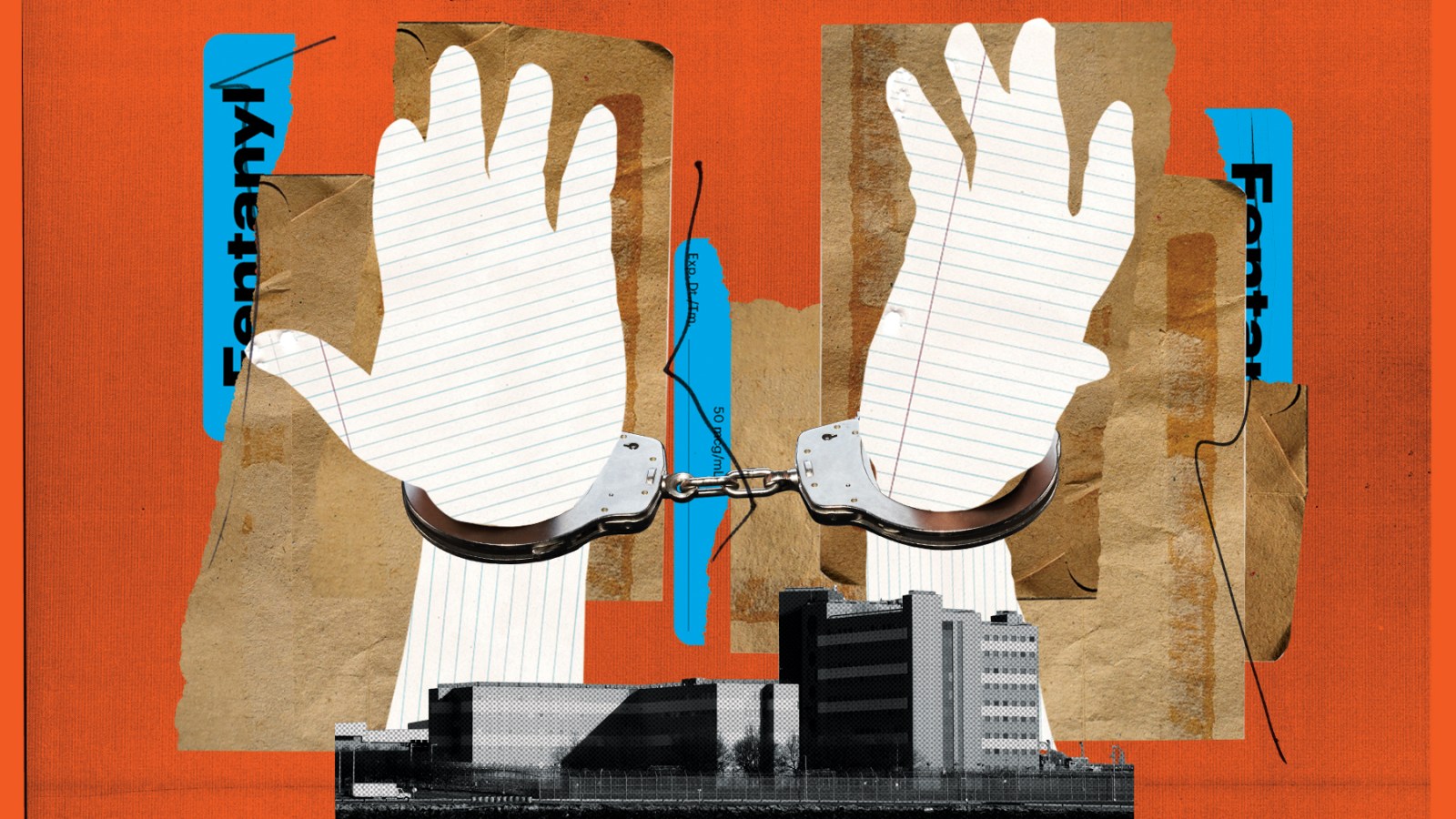 While Keri Blakinger was incarcerated, she papered her cell walls with pictures her romantic partner drew for her. “I was dating someone who liked drawing things instead of using words, and having those drawings and being able to look at them and put them on the cell wall — that was all meaningful,” says Blakinger, a journalist whose 2022 memoir Corrections In Ink chronicles her heroin addiction and 21 months behind bars. “That was a way of deepening and preserving a connection with someone in the free world.”

For people who are incarcerated, mail offers a link to the outside world that extends beyond words or drawings on a page. Paper letters and cards let people in correctional facilities hold and touch an item that a loved one held, running their fingers over the handwriting, or smelling perfume on an envelope. In a recent article for the nonprofit outlet Truthout, Ryan Moser, who is currently serving a sentence in a Florida state prison, wrote about receiving a three-by-five glossy photograph of his father after he died unexpectedly. “I held [it] in my hands for hours, memorizing his features before placing it reverently in my photo album for safekeeping.” Increasingly, correctional systems are taking away those tangible ties to friends and family members.

On Nov. 14, New York City Department of Correction commissioner Louis Molina outlined plans to digitize mail in city-run facilities in a letter to the Board of Corrections. He cited “dozens” of letters “soaked in fentanyl” and put forth a plan to have mail scanned by a third-party vendor and delivered to incarcerated people via tablet. If the plan goes into effect, it will make New York the latest in a string of carceral systems to end the delivery of paper mail. Officials say the move will curb rising overdose deaths by stopping the influx of drugs into facilities, but critics say the move will harm incarcerated people. “Digitized love just doesn’t feel the same,” Blakinger says. “You can’t hold it or touch it.” By damaging incarcerated people’s ties to the outside community, the policy could make it more difficult for them to re-enter society, potentially increasing their chances of recidivism. It also slows down the delivery process and diminishes the quality of the mail that reaches the incarcerated person. Perhaps most maddening, there is little to no proof that it will stop the majority of drugs from entering correctional facilities.

According to Wanda Bertram, a spokesperson for the Prison Policy initiative, mail bans are nothing but the flavor of the week in prison and jail policy. The practice started gathering steam in correctional facilities around 2017, she says. “Policies like this tend to come in waves, because a handful of prisons or jails will do it, and then it will catch on as a trend,” she says.

Currently, 11 state prison systems scan mail, according to the Prison Policy Initiative. Molina said it’s the policy at about 140 jails nationwide, and the Federal Bureau of Prisons, which oversees more than 122 facilities, began photocopying mail for incarcerated people at dozens of its facilities starting in 2019, according to reporting by the Intercept. But popularity doesn’t necessarily make it a good or effective policy. “It can blow up without ever actually being shown to have any positive effect whatsoever,” Bertram says. “And that’s what we’ve seen with mail scanning.”

On a practical level, outsourced mail-scanning systems come with a host of technical issues: delayed deliveries, blurred photographs, unreadable letters, and missing pages. In 2018, after Pennsylvania state prisons switched to mail scanning through a private contractor, Slate reported on privacy concerns and family photos rendered unrecognizable by poor quality scans. According to the Intercept, scanning mail has resulted in Christmas cards being delayed until March.

Emily Nonko, who works with Moser and other incarcerated writers and artists through the nonprofit Empowerment Avenue, says she prints out writers’ work front and back to meet the page limits imposed by some systems. But then, sometimes, the person in charge of scanning overlooks all the reverse sides, sending only every other page to the writer awaiting edits inside. “You’re adding an element of someone scanning the mail who’s not paying that much attention and probably doesn’t even really care, so the mail doesn’t always fully come through,” Nonko says. “An outside organizer basically told me — [regarding] an inside organizer we’re working with who has his mail scanned — don’t send mail. It’s too long, it never goes through. We’ve given up on mail.” That leaves electronic messaging services and telephones, both of which are often operated through private contractors, at a cost to incarcerated people and their families.

According to studies, it is essential for people who are incarcerated to maintain ties with communities on the outside, to better adjust to life after their sentence and to decrease the risk of recidivism. “We’ve rounded up decades of academic research showing what anyone who was formerly incarcerated already knows,” Bertram says, “which is that the more you’re able to keep in touch with your loved ones, the better chance you stand at maintaining mental and physical health while you’re locked up, doing well in prison or jail programs, and at reentering society after your release.” Topeka K. Sam, who spent three years incarcerated before becoming an activist for women in the correctional system, says getting handed magazines, letters, and cards gave her a physical reminder of the community she had supporting her. “During mail call, everyone runs over to this area, and if your name is called, you feel good, because you know you have family and loved ones and people who care about you,” she says. “It meant everything to me. It was a way to connect.”

Reliable mail also helps maintain safety within institutions’ walls, according to Bertram. “When jails ban communication services, they’re asking for security and safety problems,” she says. In a 2010 Los Angeles Times article about Ventura County instituting a postcards-only mail rule for incarcerated people, the L.A. County Sheriff’s Department spokesperson said, “We believe the mail coming to inmates is as important as their phone calls… If we were to limit the mail, we believe we would see a rise in mental challenges, maybe even violence.” The LASD did not reply to a question about whether this statement still accurately describes their stance on mail in county jails, where incarcerated people still receive original copies of mail.

According to Andrea Armstrong, a professor at Loyola University New Orleans College of Law and an expert on incarceration law and policy, while prison and jail officials have a responsibility to maintain safety inside their facilities, they also need to consider public safety after incarcerated people are released, meaning preventing recidivism and easing people’s re-entry into the general population. “It is laudable that the jail officials are trying to curb drugs within the facility,” Armstrong says. “That is important and it’s exactly what they should be doing. The question is can they do it in a way which doesn’t create other harms. And that requires data.”

The move to change the mail policy in New York illustrates the lack of data on drugs in jails. When Commissioner Molina initially raised the idea for the mail ban at an October City Council meeting, Council Member Carlina Rivera, who chairs the Committee on Criminal Justice, pushed back on the notion that “most” drugs could be coming through the mail, as Molina claimed. Rivera cited data that showed drug seizures doubled during the pandemic lockdown when no visitors were allowed — and a minority of those came through the mail. She wanted to know how many drugs were coming in through DOC staffers, numbers Molina said he didn’t have. “I agree with Commissioner Molina, that drugs have no place in jail,” Rivera tells Rolling Stone. “We know that drugs fuel violence, they put people at risk of instability, addiction, overdose, and much more. But the data doesn’t seem to indicate that digitizing the mail is the most effective way to stop the flow of drugs.” Molina and the DOC did not respond to requests for comment or an interview, and Rolling Stone has filed a public records request with the city Department of Investigations for data on drugs seized from DOC staff in recent years.

Ultimately, stopping the flow of drugs into correctional facilities is just one way to curb overdoses. Brian, a longtime activist who served a year in New York’s Rikers Island in 2006 and then two shorter stints years later for parole violations, says he is 17 months sober thanks to 12-step programs. “You’re not gonna keep drugs out of anywhere,” he says. “Instead of spending all that time and resources, they’d be way better spent and more effective put into education programs, self-help programs, 12-step programs. That’s what’s gonna get people off drugs.”

Armstrong, the Loyola New Orleans law professor, says prison design and closer supervision of those incarcerated can also help, along with improving medical response times in the facilities. She says mail restrictions should not be initiated lightly. “We know that connection to community and loved ones are one of the primary and evidence-based methods to prevent recidivism upon release, so there’s a high bar for any new policies that disrupt that connection,” she says.

Blakinger worries the adverse effects of mail bans on incarcerated people will be too easily overlooked by decision makers. “It’ll be an easy impact to ignore because it’s subjective,” she says. ”It’s difficult to measure how much you’re harming someone’s relationships and connections with the free world. It’s hard to measure how much harder you’re making it to re-enter the outside world.”