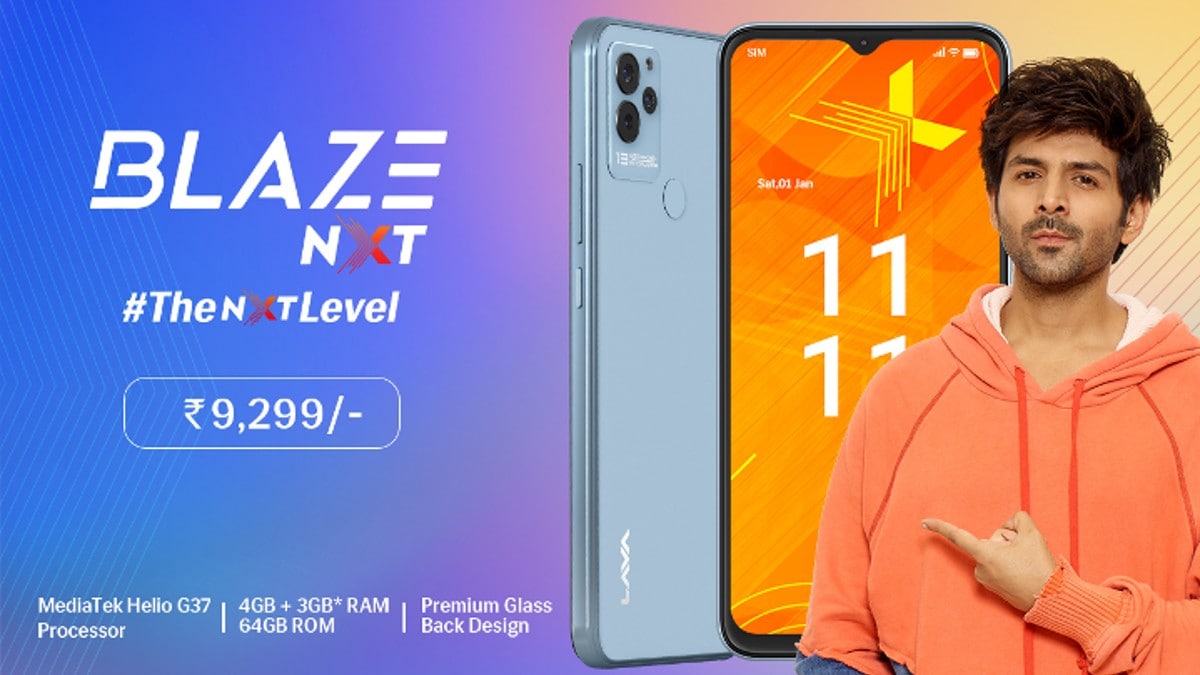 Lava Blaze NXT launched in India on Friday. It appears to be an updated version of the Lava Blaze that debuted earlier this year in July. Lava has confirmed that this handset is powered by a MediaTek Helio G37 SoC, coupled with 4GB of RAM and 64GB of onboard storage. It gets a 6.5-inch IPS display with an HD+ resolution. The handset also sports a waterdrop-style notch on the front for housing the selfie camera and gets a triple rear camera setup.

A microsite for the Lava Blaze NXT has gone live on Amazon, which confirms that this handset will cost Rs. 9,299 for its sole 4GB RAM + 64GB onboard storage model. The Amazon listing so far reveals that this Lava smartphone comes in red and green colours.

Blaze NXT will be available across Lava’s retail network starting from today. The smartphone will go on sale on Amazon.in and Lava’s e-store on 2nd December, 2022.

The Blaze NXT sports a 6.5-inch IPS display with an HD+ resolution. Under the hood, it packs a MediaTek Helio G37 SoC, paired with 4GB of RAM. This smartphone also comes with 3GB of additional virtual RAM. It includes 64GB of onboard storage as well.

For optics, this Lava smartphone gets a 13-megapixel AI triple rear camera setup and an 8-megapixel selfie snapper on the front. The Lava Blaze NXT also has a premium glass back panel design and appears to sport a fingerprint sensor on the back.

It packs a 5,000mAh battery, which is claimed to provide an all-day battery life. The Lava Blaze NXT features a USB Type-C port and a 3.5mm headphone jack on the bottom. Its volume rockers and power button are placed on the right spine.

Avatar: The Way of Water Has Finished Post-Production, Just Three Weeks Ahead of Release

Behead Your Wife, But Don’t Tweet By Howard Bloom
Asian American civil rights organization helps organize flood of Monterey Park donations
Liam Hemsworth and Laura Dern Making Out in L.A. for Netflix Movie
US shoots down ‘spy balloon’ as China threatens ‘further actions’
No 10 insists UK economy is strong despite IMF warning it will fare worse than any other in developed world – including Russia