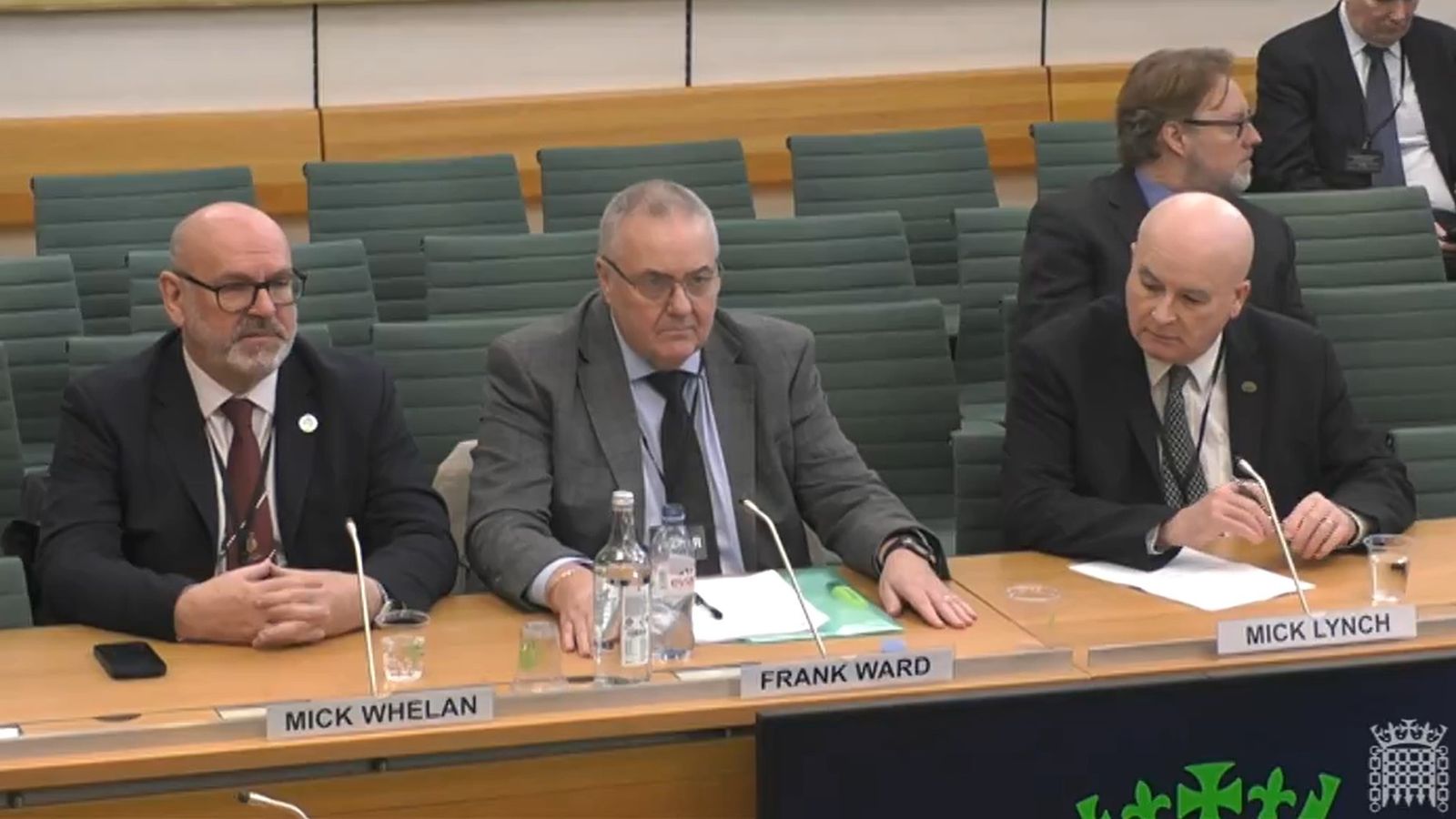 Rail union leaders have told MPs there is much left to agree if further national strikes are to be averted, with one accusing the government of “sabotage” in its negotiations.

RMT leader Mick Lynch said in evidence to the transport committee his members were “a long way” off securing deals on the core pay issue.

He said Network Rail and train operating companies were separately offering well under half what his members deserved to navigate the cost of living crisis, after years of pay freezes.

His colleagues at the Aslef and TSSA unions declared they were as far away as was possible to be from deals to end their separate disputes, when asked to give a score on a scale of one to 10.

When asked about the state of play in its row with train operators, Mick Whelan, general secretary of the drivers’ Aslef union, told the MPs: “I think you can include zero. We are further away than where we started.”

Union bosses were also asked how long they could sustain the walkouts, and Mr Whelan replied he was in it for the “long haul”, and that they could financially sustain the action for an “awful long time”.

But he said he would like to resolve the issues “tomorrow” so he could go back to doing his “day job”.

THE OFFERS ON THE TABLE TO RAIL UNIONS

The larger RMT union is locked in a pay and work reform battle with Network Rail and 14 operating firms. It is seeking a pay rise to shield its members from the cost of living crisis.

The good news here, for simplicity purposes, is that the 14 train operators are represented by a single entity, the Rail Delivery Group (RDG).

The RMT has dismissed a pay offer of 4% for 2022 and 4% for 2023 from the RDG. This includes a rejection of a demand for driver-only operated trains.

The union has also rejected an offer from Network Rail (which manages the signalling and track maintenance) of a 5% pay rise for 2022 and 4% for 2023.

This offer is, however, expected to be rejected when the union’s executive committee meets next week.

Both are due to hold more talks with the RMT and TSSA in the coming days but Mr Montgomery admitted “more work” was needed with Aslef as the dispute was in its infancy.

Mr Lynch was particularly vocal on the role of the government, saying ministers had engineered the dispute.

He said it had deliberately provoked his members through “reckless policy” over many years and inflicted “loads” of damage on the rail system as a result.

He accused the Department for Transport of taking a back seat role in the negotiations, and seeking an expansion of driver-only train operation in its talks with the RDG, adding the union would never agree to such a move.

“It’s daft. To me, it’s sabotage. They wanted these strikes to go ahead,” he claimed, when describing how nine clauses on the issue were added to a draft document ahead of the walkouts last week.

Mr Whelan backed the RMT’s position, saying that Aslef also fiercely opposed driver-only trains on the grounds they are unsafe.

The TSSA has agreed a pay deal with Network Rail but remains in dispute with train operators – with London’s Elizabeth Line set to be hit by a first walkout on Thursday.

The RDG and Network Rail have consistently argued that the railways cannot sustain the pay hikes being demanded, especially given the damage inflicted on passenger numbers since the pandemic.

When asked about the RMT pay dispute, Mr Shoveller said only a few thousand Network Rail staff needed to be won over, citing higher worker support for a settlement.

For his part, Mr Montgomery also refused to discuss whether this would include improved offers, saying that to reveal any such position would be disrespectful to the trade unions.

Post-Macro World Sees Rise in Microsoft OneNote Documents Delivering Malware
‘The Last of Us’ Is Just the Beginning of Hollywood’s Big Video Game Gamble
‘Rust’ Armorer was Stretched Thin, Tried to Ensure Gun Safety with Baldwin
Koe Wetzel’s At The Sonic Ranch Working With Pecos Hurley, Ben Burgess, Ernest & More… Could It Be For His Country Album?
Behead Your Wife, But Don’t Tweet By Howard Bloom