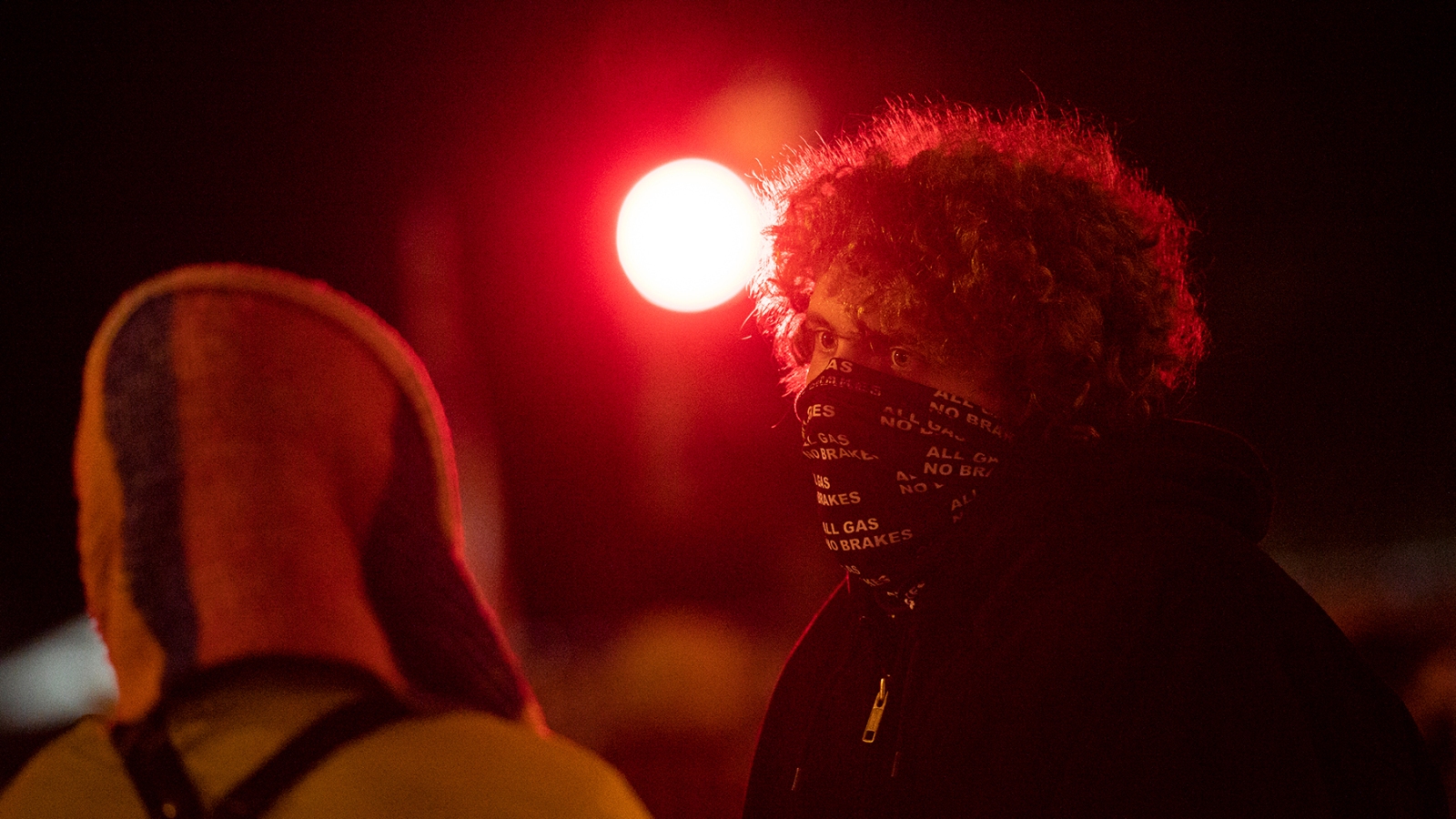 When Charlotte was 18, she matched with a then-19-year-old man named Andrew Callaghan on Tinder. The now-24-year-old, who requested a pseudonym to protect her privacy, was familiar with Callaghan, as they had attended neighboring high schools in the Seattle area. Though Callaghan would later become well-known as the host of the popular YouTube channels All Gas No Brakes and Channel5, as well as the filmmaker behind HBO’s 2022 documentary This Place Rules, at the time she knew him as a goofy aspiring rapper who went by the name TrekGod. “The view I had of him was like, ‘Haha, look at this dude,’” she tells Rolling Stone. But in 2016, she agreed to go out for coffee with him, with the two returning to the apartment he was staying at, she says, to drink wine and watch a movie.

What happened next, she says, was an “abrupt shift of tone” in the evening. Charlotte claims Callaghan kissed her, then poured wine on her chest and licked it off; they were acts she said she consented to, even though she was somewhat uncomfortable. It wasn’t until Callaghan grew more persistent, placing her hand on his crotch, that Charlotte started saying no.

“He wasn’t taking a simple no for an answer, and consequently, it turned into me trying to make up an array of excuses as to why I didn’t want to have sex,” she says. “He kept insisting that I needed to ‘get him off’ because I was giving him ‘blue balls’ by not having sex with him.”

Eventually, Charlotte says, Callaghan got the message. The two never spoke again, but she says the incident left her feeling “violated, confused, and incredibly disrespected.”

For the next few years, Charlotte watched with growing discomfort as Callaghan’s platform grew: first with All Gas No Brakes, in which he traveled across the country in an RV interviewing various eccentric subcultural figures; then with his follow-up channel Channel5, which garnered more than 2.26 million subscribers, and last year’s release of This Place Rules, which documents the events leading up to the January 6th Capitol insurrection.

Over the years, Charlotte privately told people who shared Callaghan’s content on social media about the encounter, messaging one friend in 2019 that Callaghan had “tried to make me do sexual things that I didn’t want to” and another friend in 2020 that Callaghan was “really sexually inappropriate with me,” according to screengrabs and screen recordings viewed by Rolling Stone. Charlotte’s ex-boyfriend, whom she told about the encounter with Callaghan in 2017, tells Rolling Stone that Charlotte told him Callaghan “was kind of aggressive” and that he “grabbed her between the legs.”

Then, while scrolling through TikTok, Charlotte saw another woman had posted a video recounting a similar story about Callaghan. “It went from giving this 19-year-old goofy dude who doesn’t understand consent the benefit of the doubt to, ‘Oh, this is a person who holds societal power and has a platform now,’” she says, explaining her decision to speak out about her experience with Callaghan.

A popular creator with more than 150 million views on his channel, Callaghan earned fame by posting videos of his deadpan interviews with conspiracy theorists, far-right extremists, and members of other fringe subcultures. He expanded his profile with last December’s release of This Place Rules, which has drawn acclaim for exposing the absurdities of the far right.

Neither Callaghan nor his reps responded to repeated requests for comment from Rolling Stone. But in a statement to TMZ, a legal representative for the filmmaker said, “Andrew is devastated that he is being accused of any type of physical or mental coercion against anyone. Conversations about pressure and consent are extremely important and Andrew wants to have these conversations, so he can continue to learn and grow.”

On TikTok and the Channel5 subreddit, other women have come forward with their own alleged experiences with Callaghan, alleging that they felt coerced or pressured into performing various sexual acts with him. As previously reported by Rolling Stone, one of these women, Dana, who goes by the handle @moldy.freckle, alleged in a video that Callaghan had touched her inner thigh, kissed her neck, and attempted to put his hand down her pants while she was giving him a ride home. “I told him to stop. I told him to get off of me multiple times,” she says in the video. “He tried to put my hand down his pants and I was fighting against him during this, telling him to please stop.” Eventually, she says, Callaghan left her car.

Another woman, a TikTok creator who goes by Caroline Elise, posted a video last week recounting her own experience with Callaghan in May 2021 that received more than 189,000 views. It was seeing Caroline’s video that prompted Charlotte to come forward.

In an interview with Rolling Stone, Caroline says that she initially met Callaghan at the Bends, a dive bar in St. Petersburg, FL. She approached Callaghan, who was with a woman who appeared to be his girlfriend, as a fan of his content. A few months later, they agreed to meet up when Callaghan was in Miami and exchanged Instagram DMs — screengrabs of which Caroline later posted on TikTok — along with a photo of her posing with Callaghan. Callaghan appeared to be in distress, telling her that he had had a falling-out with a crew member, she says, and asked if he could stay at her place, which she agreed to.

Caroline says that because she had met Callaghan while he was with another woman, she did not initially think the meeting was romantic. When they met up again at the same bar a few months later, in March 2021, however, the vibes shifted: “He was buying me drinks and trying to impress me,” she says. “People who wouldn’t have talked to me at the bar were kissing my ass.” At the bar, she says, Callaghan tried to kiss her, and she says she politely turned him down.

When they got back to her place, Caroline says, Callaghan became persistent, allegedly badgering her for sex. “He was very pushy and not taking no for an answer,” she says. “I was like, ‘No, I’m not feeling it.’” Eventually, she relented and, she says, was coerced into various sexual acts with Callaghan. “I was sexually assaulted when I was 14 by someone else. I fought back hard [against that person]. I pushed [that person] off of me,” she says. “I think that in the moment that’s why I didn’t fight [Callaghan] off of me as much as I could have and I tried to turn him down politely until he begged and begged and I finally let him touch me.”

When Caroline woke up at 4:00 a.m. having a “full-blown panic attack,” she kicked Callaghan out of her apartment. For the next few months, she says she blamed herself for the encounter, and felt guilty for inviting him over. “I internalized a lot of disgust and anger at the situation,” she says, adding that her mother bought her a new comforter because she didn’t want to sleep in her own bed afterward.

A friend of Caroline’s, who asked not to be named, told Rolling Stone that Caroline had shared details of the encounter with her shortly afterward. In the spring of 2021, the friend posted about Callaghan on Instagram accusing him of assault and urging people to unfollow him. The Instagram story was intended as a “warning” to other women in the area, she tells Rolling Stone, though she did not name Caroline directly. Caroline’s boyfriend also confirmed that she had told him about Callaghan in the spring of 2021, a few months after that night in her home.

After the release of This Place Rules, Caroline recorded her TikTok video recounting her experience with Callaghan because, she says, “it was painful to see everyone praising him.”

Abso Lutely Productions, the company founded by Eric Wareheim and Tim Heidecker of comedy duo Tim and Eric, and A24 produced This Place Rules. (A rep for A24 did not respond to a request for comment.) On Thursday, Heidecker addressed the allegations against Callaghan on his weekly podcast Office Hours. “It’s been a very painful week for us,” he said, adding that he and Wareheim “have no professional relationship with Andrew at this time and no plans going forward to have any relationship with him.” “We believe these women who came forward and, of course, totally condemn the type of behavior that Andrew is being accused of,” he added.

In their statement to TMZ, Callaghan’s lawyer alleged that one of the accusers had attempted to extort Callaghan. “While every dynamic is open to interpretation and proper communication is critical from all those involved, repeated requests for money should not be part of these conversations,” the lawyer said. TMZ further reported that “a source with direct knowledge” had suggested it was Caroline who had asked Callaghan for money.

Caroline denies the claim. “He’s trying to act like I blackmailed him when I was really just trying to remind him that I’m still here and still suffering,” she says. Texts provided to Rolling Stone show that Caroline requested that Callaghan “[help] contribute to the massive amounts of therapy bills I have accrued due to the night you coerced me and the resulting trauma” before including her Venmo.

Caroline says that while she has been attacked online by many of his fans who have questioned her story, she has also received messages of support, including some from women who have had alleged similar experiences with Callaghan, including Charlotte.

For her part, Charlotte says she would not have come forward had Callaghan not amassed such a tremendous platform or built his following on seemingly progressive bona fides. The blurred lines of their encounter also contributed to her decision to largely stay quiet until now. “This is something that has bugged me for years. It left me with a bad taste in my mouth. But there’s never been a reason to come out and announce this guy had harassed me because quite frankly, every woman I know has had an experience like this,” she says. “[Which] is bleak, but that’s kind of the world we live in.”

It wasn’t until seeing Caroline’s video, as well as videos made by other creators alleging that Callaghan had ignored their boundaries, that Charlotte realized, “this person is making content with the intention of making change and justice and is seemingly using their societal power to get laid,” she says. “And I think that’s really nasty.”