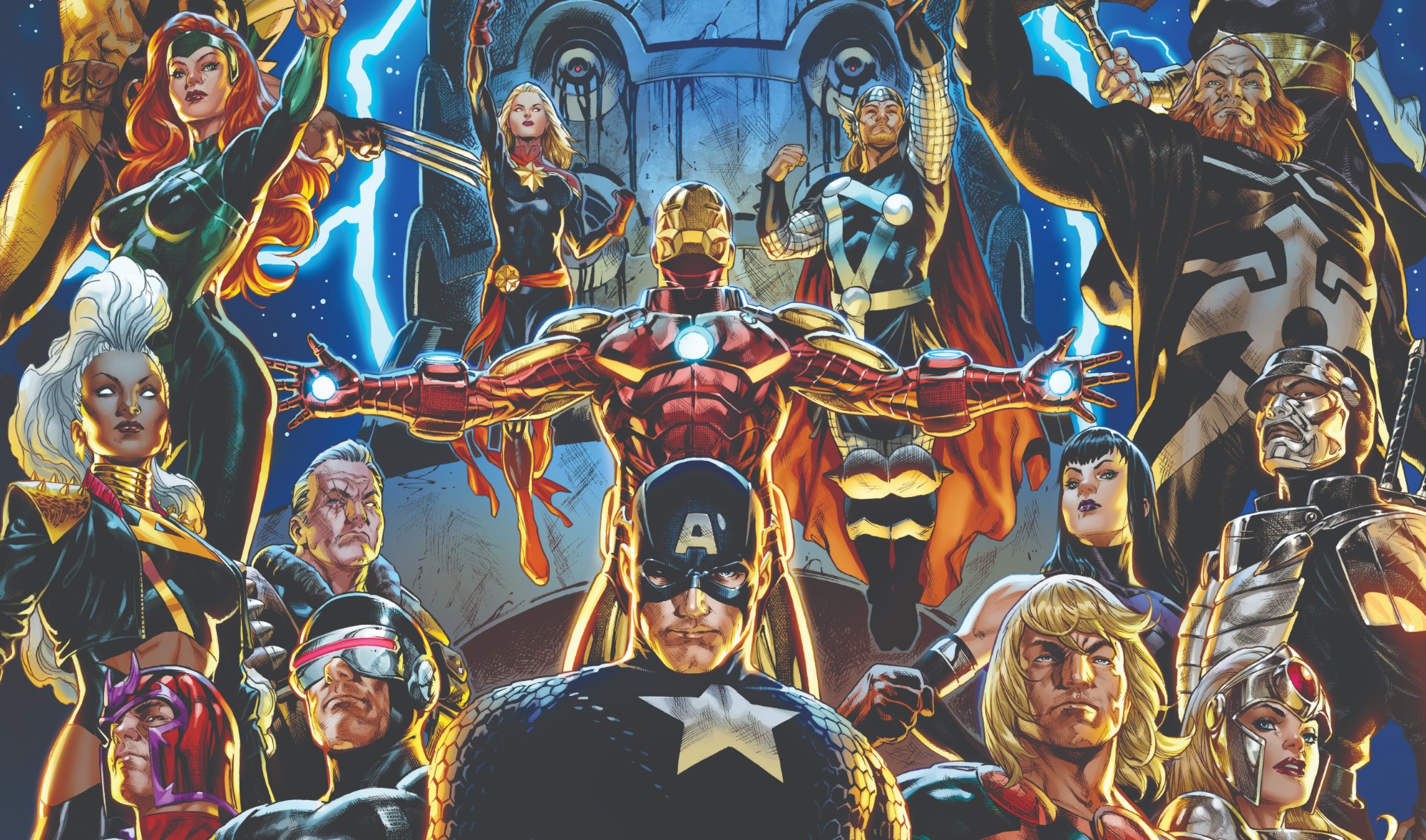 AXE: Judgment Day is one of the most fascinating event comics of all time. It’s got all the trappings of a big summer mega crossover, and structurally, it delivers: there is a massive war between the Eternals and the X-Men. Thousands of mutants die (they get better). Captain America dies! He also gets better. Hell, pretty much the entire population of Earth dies. They get better too. It’s massive! It’s exciting! It’s thrilling!

But it’s also a fairly even split between enormous explosions and deep character studies. It pays off years of character development and existential shifts that Kieron Gillen, Judgment Day’s mastermind, has been building across multiple books. It’s the culmination of the story Gillen started in twelve issues and three one-shots of Eternals, and what he had an eye on as he started Immortal X-Men. Hell, it’s even a nice capstone to the work he did on Mister Sinister waaaaaaaay back in the early ‘10s Uncanny X-Men, with some nice echoes of his Iron Man run.

But it’s also sprawling. If you want to read everything that ties in or crosses over with Judgment Day, you’re looking at 35 issues. And if you REALLY want to go for it, you’re looking at another 35 issues of older stuff. We’re here to tell you: you don’t need to read all of that. Here’s what you should read, what you must read, and what you can come back to later from AXE: Judgment Day.

You don’t have to read the deep background stories to understand what happens in Judgment Day, but they’re so good that I’m certain you won’t regret it.

The plot groundwork for Judgment Day is laid here. Eternals have hardwired programming to protect the Celestials, and to correct excess deviation. They’re resurrected when they die, only the secret of their resurrection is that a human life is sacrificed to bring them back each time. This run is easily the best Eternals book since Jack Kirby created them, and would be worth reading even if it didn’t pay off so wonderfully in this event. PS: the series ends with new Eternal leader Druig deciding that the mutants on Krakoa represented “excess deviation.”

Gillen and Lucas Wernek took over the flagship X-Men book after Jonathan Hickman left the franchise and somehow made it better. Immortal follows the Quiet Council, the rulers of Krakoa, as they navigate the personalities and petty politics of their new land. Each issue uses a different Council member as a point of view: issue 1 is glam save-skipper Sinister, issue 2 is new member and keystone to the 5, the Krakoan resurrection team, Hope Summers; and issue 3 is Mystique’s wife Destiny. It’s also really good.

The direct lead-ins to Judgment Day all lead right up to war exploding on the shores of Krakoa. You can also include the 2022 Free Comic Book Day issue that’s billed as a lead-in, but a fair bit of that is rehashed in Judgment Day #1, so it’s not mission critical.

The Hellfire Gala is an annual high fashion gathering held by the Hellfire Trading Company, Krakoa’s public facing distributor of life saving mutant drugs. Each year, the Gala is full of drama and celebrities, and it concludes with the election of a new team of X-Men. This year’s Gala was tainted by humans discovering the secret to Krakoan immortality and being quite upset that it wasn’t being shared with the entire world.

Meanwhile, Moira MacTaggert, now a full on villain after her heel turn in Inferno and X Lives/Deaths of Wolverine, connects with Eternal leader Druig. Terrible things ensue. Immortal X-Men #4 spotlights Emma Frost, weaving in and out of the events depicted in the Gala issue. And in Eve of Judgment, Druig tries frantically to destroy Krakoa the easiest way possible, and when none of it works, he makes an awful decision.

In the opening of the main story, war is declared and conducted. Eternal assassins come to Krakoa to destroy the Five (thanks to Moira’s intelligence). The Hex, a group of Eternal war machines with a lot more going on than you first think, are unleashed on Krakoa. Uranos – one of the oldest, and easily the worst Eternal (a hell of a statement considering Thanos is also an Eternal) – is unleashed on Arrako (Mars). Millions of mutants are killed by the Eternals and their war machines.

Judgment Day #1 follows the main conflict from the mutant’s perspective, while Death to the Mutants is the war from the Eternals’ perspective – including a heretic faction led by Thena and Ikaris who are working with the Deviants in Lemuria.

Immortal X-Men #5 focuses on Bennet du Paris, Exodus, as he battles one of the Hex and thinks back to the time Sersi stole his boyfriend during the Crusades.

X-Men follows the main superhero team as they attempt to break the Eternals’ teleporter, and Judgment Day #2 spends a little more time on a third faction: Ajak and Makkari, a separate heretic faction, are trying to reprogram the Eternals by creating a new Celestial for them to worship. They’re joined in their work by Mister Sinister (who did a fair bit of genetic tinkering on the Dreaming Celestial back when it was parked under San Francisco during Gillen’s run on Uncanny X-Men) and Iron Man (who did a fair bit of snooping inside of a Celestial corpse, as the current Avengers run sees the team housed in the dead body of the Progenitor Celestial).

Anyway, I know what you’re thinking and yes, you’re absolutely correct. The heroes’ plan to save the world is basically that old Courage Wolf meme: If God gives you lemons, YOU FIND A NEW GOD.

It doesn’t go so great.

Both Red and Legion show the war on Arakko from different perspectives. Red uses Storm, Magneto and a few others on the Arakki ruling council’s perspectives to show the brutal devastation Uranos and his war machines cause on Mars in just an hour. Legion uses that war to show how it devastates him, as we discover all the ways Magneto was better to David than his own father. Both of these books are masterpieces, and the Judgment Day crossover issues are high water marks.

In the second phase of the story, the Celestial build team has successfully created a new god! The reborn Celestial is named the Progenitor, and its reaction upon completion is a resounding “Thanks I hate it.” It decides to judge the entire world, one person at a time.

In Judgment Day #3, the first one he comes for is Captain America, but he wastes little time moving onto screwing with the X-Men. Death to the Mutants sees the Deviants judged as they join the battle alongside the mutants. Immortal X-Men #6 focuses on Sebastian Shaw as he works to cut a deal with Thanos’ brother Starfox to end the war. Cyclops is judged in X-Men #14, which is almost peripheral, but too much fun to ignore. And we see the fruits of Shaw’s labor in Judgment Day #4 as the X-Men get to rig an election.

Almost all of these are fun character studies as the Progenitor digs into each book’s main characters and judges them. They’re worth reading if you care about the characters, and okay to skip if you don’t.

LEST YE BE JUDGED

The last third of Judgment Day is nearly perfect. The Progenitor finishes judging the Earth and, as one would reasonably expect, finds it lacking. So it tries to destroy the planet, setting off a frantic race to hold off the Earth’s self-destruct mechanism and stop the Progenitor from trying again.

With all the explosions happening around the Earth, the Progenitor continues judging individual characters like Nightcrawler in a spectacular issue of Immortal X-Men, or Starfox and Iron Man in the Starfox and Avengers tie ins, or Jean Grey in AXE: X-Men (maybe the best issue of the entire series, and maybe the best Jean Grey story ever). When the heroes inevitably win, it’s via a different means than you’d expect, and Omega resets the various status quos very effectively.

When all is said and done, AXE: Judgment Day will likely be remembered as one of the best crossover events that Marvel has ever put out. It’s fun, beautiful, exciting, thoughtful, and well planned, a model for just how great these types of comics can be.