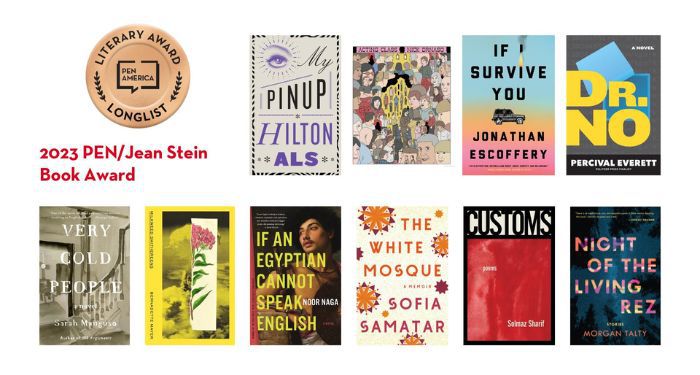 The 2023 PEN American Literary Award Longlists have been announced! This year’s awards will confer $350,000 to more than 100 writers and translators in eleven different categories that include fiction, nonfiction, poetry, biography, essay, science writing, literature in translation, and more. The winners will be announced at the Literary Awards Ceremony on March 2nd at The Town Hall in New York City.

This year marks the 60th anniversary of PEN America’s first literary prize. In PEN America’s announcement of this year’s longlists, Clarisse Rosaz Shariyf, chief of literary programs, writes that, “For 60 years, writers and translators selected for PEN America’s awards have brought us closer to unfamiliar lives and experiences and opened our minds to ideas and subjects we may not have realized could fascinate and instruct us.” That rings true in my mind as the PEN America lists are some of the most diverse and interesting to be released each year. This year’s honorees are telling powerful and necessary stories of displacement and migration, racial justice, war, family, identity, and so much more.

There were 1,744 total entries this year with half of those on the longlists coming from independent and university presses. And this year’s honorees are diverse in a whole host of ways, including gender, race, sexual orientation, and geography. The PEN Translation Prize was the first of the prizes to be presented 60 years ago. This year’s awards honor translations of books by authors from 20 different countries. Translators working in more than a dozen languages are represented on the list, including Arabic, Belarusian, Danish, French, Galacian, German, Indonesian, Italian, Japanese, Persian, Portuguese, and Spanish.

This award is given to a book-length work of any genre for its originality, merit, and impact, which has broken new ground by reshaping the boundaries of its form and signaling strong potential for lasting influence. And this year’s judges are Joan Naviyuk Kane, Lauren Groff, and Madeleine Thien.

If I Survive You by Jonathan Escoffery (MCD)

This award is given to an exceptional book-length work of any literary genre by an author of color. This year’s judges are Jenn Baker, Maurice Carlos Ruffin, Nina McConigley, and Erika L. Sanchez.

All the Flowers Kneeling by Paul Tran (Penguin Books)

The Town of Babylon by Alejandro Varela (Astra House)

This award is given to an author whose debut collection of short stories represents distinguished literary achievement and suggests great promise for future work. And this year’s judges are Nafissa Thompson Spires, Chris Gonzalez, and Susan Muaddi Darraj.

Is This How You Eat a Watermelon? by Zein El-Amine (Radix Media)

If I Survive You by Jonathan Escoffery (MCD)

This award is given to a debut novel of exceptional literary merit by an American author. And this year’s judges are Gina Apostol, Oscar Cásares, and Matthew Salesses.

The School for Good Mothers by Jessamine Chan (Simon & Schuster)

Calling For a Blanket Dance by Oscar Hokeah (Algonquin Books)

Which Side Are You On by Ryan Lee Wong (Catapult)

This award is given to a poet whose distinguished collection of poetry represents a notable and accomplished literary presence. This year’s judges are Kimiko Hahn, Molly McCully Brown, Allison Rollins, and Willie Perdomo.

[To] The Last [Be] Human by Jorie Graham (Copper Canyon Press)

Then The War by Carl Phillips (Farrar, Straus and Giroux)

This award is given to a book-length translation of poetry from any language into English. And this year’s judges are Baba Badji, Mona Kareem, and Julia Leverone.

The Threshold by Iman Mersal (Farrar, Straus and Giroux)
Translated from Arabic by Robyn Creswell

Let Us Believe in the Beginning of the Cold Season by Forough Farrokhzad (New Directions Publishing)
Translated from Persian by Elizabeth T. Gray, Jr.

This award is given to a book-length translation of prose from any language into English. And this year’s judges are Layla Benitez-James, Slava Faybysh, Sora Kim-Russell, and Elton Uliana.

All Your Children, Scattered by Beata Umybyeyi Mairesse (Europa Editions)
Translated from French by Alison Anderson

Call Me Cassandra by Marcial Gala (Farrar, Straus and Giroux)
Translated from Spanish by Anna Kushner

A Line in the World: A Year on the North Sea Coast by Dorthe Nors (Graywolf Press)
Translated from by Caroline Waight

PEN/DIAMONSTEIN-SPIELVOGEL AWARD FOR THE ART OF THE ESSAY ($15,000)

This award is given to a seasoned writer whose collection of essays is an expansion on their corpus of work and preserves the distinguished art form of the essay. And this year’s judges are Jill Lepore, John McWhorter, and Simon Winchester.

I’ll Show Myself Out by Jessi Klein (HarperCollins)

Translating Myself and Others by Jhumpa Lahiri (Princeton University Press)

A Place in the World by Frances Mayes (Crown)

Still No Word From You by Peter Orner (Catapult)

Animal Bodies: On Death, Desire, and Other Difficulties by Suzanne Roberts (University of Nebraska Press)

Streaming Now: Postcards from the Thing That Is Happening by Laurie Stone (Dottir Press)

A Left-Handed Woman by Judith Thurman (Farrar, Straus and Giroux)

The Green Hour: A Natural History of Home by Alison Townsend (The University of Wisconsin Press)

This award is given to a work that exemplifies literary excellence on the subject of the physical or biological sciences and communicates complex scientific concepts to a lay audience. And this year’s judges are Tim Folger, David Hu, and Emily Raboteau.

Different: Gender Through the Eyes of a Primatologist by Frans de Waal (W. W. Norton & Company)

A Molecule Away from Madness by Sara Manning Peskin (W. W. Norton & Company)

The Wine-Dark Sea Within: A Turbulent History of Blood by Dhun Sethna (Basic Books)

This award is given to a biography of exceptional literary, narrative, and artistic merit, based on scrupulous research. And this year’s judges are Manu Bhagavan and Silvana Paternostro.

Dilla Time: The Life and Afterlife of J Dilla, the Hip-Hop Producer Who Reinvented Rhythm by Dan Charnas (MCD)

The Adventures of Herbie Cohen by Rich Cohen (Farrar, Straus and Giroux)

G-Man: J. Edgar Hoover and the Making of the American Century by Beverly Gage (Viking)

Guru to the World: The Life and Legacy of Vivekananda by Ruth Harris (Belknap Press of Harvard University Press)

The Pope at War: The Secret History of Pius XII, Mussolini, and Hitler by David I. Kertzer (Random House)

This award is given to a distinguished book of general nonfiction possessing notable literary merit and critical perspective that illuminates important contemporary issues. And this year’s judges are Sanjiv Bhattacharya, Geraldo Cadava, and Sofija Stefanovic.

The Naked Don’t Fear the Water: An Underground Journey with Afghan Refugees by Matthieu Aikins (HarperCollins)

After the Ivory Tower Falls: How College Broke the American Dream and Blew Up Our Politics–And How to Fix It by Will Bunch (HarperCollins)

South to America: A Journey Below the Mason-Dixon to Understand the Soul of a Nation by Imani Perry (HarperCollins)

The War of Nerves: Inside the Cold War Mind by Martin Sixsmith (Pegasus Books)