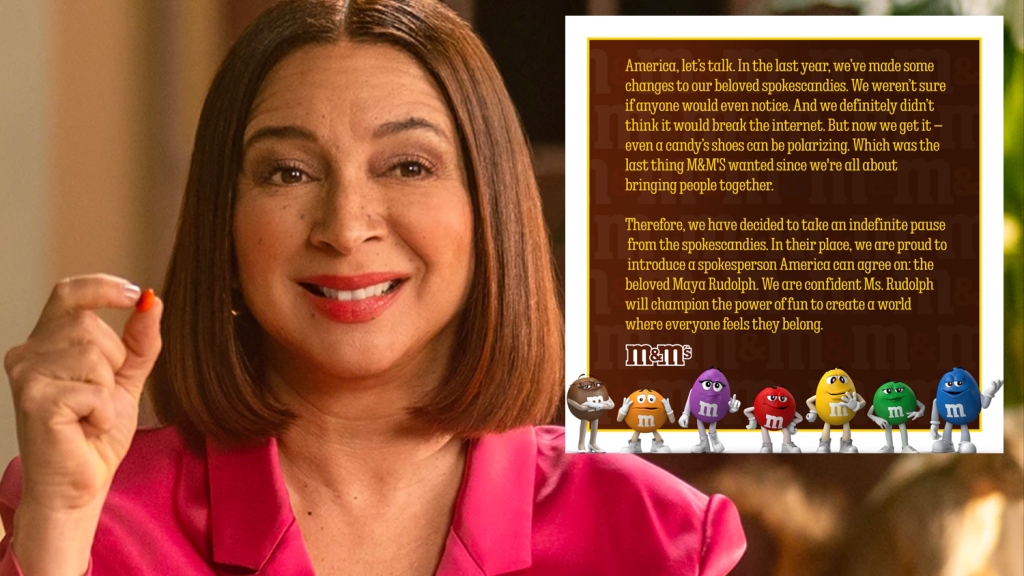 M&M’s are retreating from the use of “spokescandies” and instead deploying Maya Rudolph as a new spokesperson, after the brand’s efforts to promote diversity and inclusion triggered a backlash on the right that they were going “woke.”

The brand issued a statement on Monday, saying, “America, let’s talk. In the last year, we’ve made some changes to our beloved spokescandies. We weren’t sure if anyone would even notice. And we definitely didn’t think it would break the internet. But now we got it — even a candy’s shoes can be polarizing. Which was the last thing M&M’s wanted since we’re all about bringing people together.”

M&M’s will put the controversial “spokescandies” on pause and instead feature Rudolph as someone who will “champion the power of fun to create a world where everyone feels they belong.”

Last year, M&M’s found itself in the midst of performative fury when commentators complained of changes to the spokescandies. Carlson called out M&M’s for featuring the green character wearing sneakers instead of the previous “sexy boots.” More recently, Carlson, warning that “woke M&M’s have returned, targeted the introduction of a purple M&M character as “obese” and lamented the way the brand returned the boots to the green M&M’s. “Apparently is now a lesbian maybe?” M&M’s had launched a campaign earlier this month “supporting women flipping the status quo,” with packaging featuring the spokescandies.

While Carlson and other hosts have perfected cable news’ mining of outrage and grievance, the war against M&M’s ties into a broader pushback against corporations for “going woke,” a term usually applied to efforts to highlight diversity and inclusion. Florida Governor Ron DeSantis has made it a feature of his gubernatorial strategy and likely his presidential campaign if he chooses to run in 2024.

Rudolph is not apolitical — she appeared with Hillary Clinton and Kamala Harris at a fundraiser for Joe Biden in 2020 — but the move seems designed to stay away from the political fray. M&M’s parent company Mars Wrigley is planning a Super Bowl ad spot.