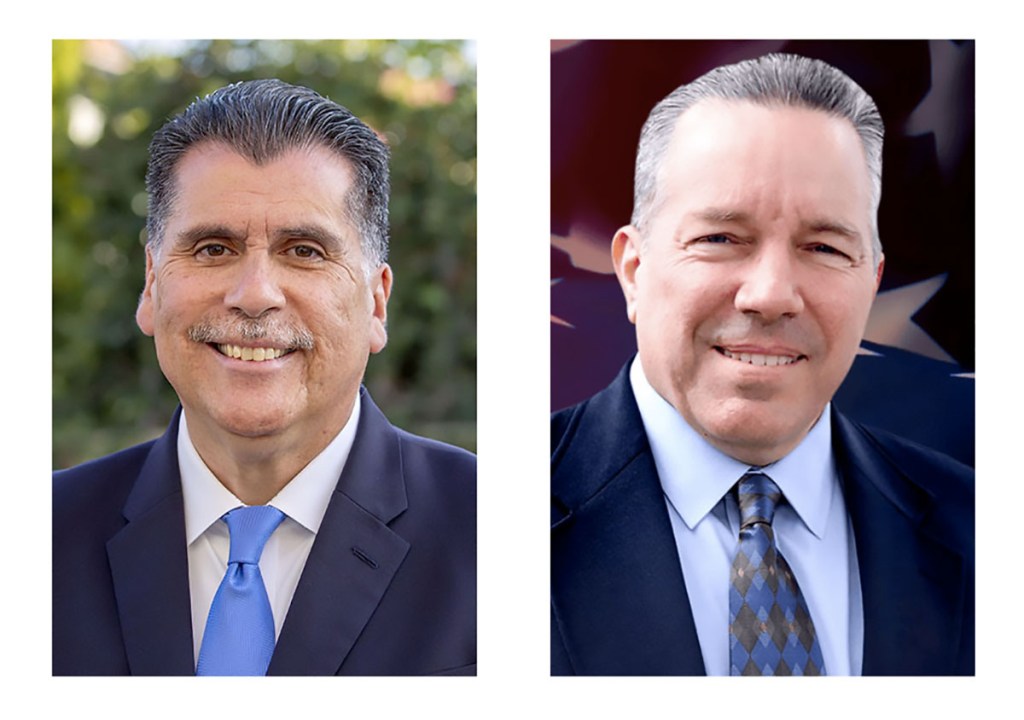 Los Angeles County Sheriff Alex Villanueva and his opponent, retired Long Beach Police Chief Robert Luna, agreed on very little at their first debate ahead of a face-off in November, save for their mutual love of “The Big Bang Theory” and the Dodgers.

Their appreciation of Sheldon and his friends elicited a high five between the two men, a small moment of civility after they had spent much of the night throwing barbs at each other and their respective track records.

Villanueva, the incumbent in the Nov. 8 election, described Luna as a “puppet” put forward by the five county supervisors who have endorsed him, while Luna painted Villanueva as a obstructionist pointing the finger at everyone but himself.

Villanueva, in response, criticized District Attorney George Gascón for the rise, saying the county needs a prosecutor that “does his job.”

“His special orders are directly leaving dangerous people on the street,” said Villanueva, a major supporter of the recent failed effort to recall Gascón.

The exchange highlighted the two men’s differing approaches to law enforcement. Villanueva champions a tougher stance on crime and increased funding for law enforcement. He expects other agencies, such as the District Attorney’s Office and the Board of the Supervisors, to either support him or stay out of his way.

“There is zero accountability, zero transparency,” Villanueva said. “We’re just dumping money down a rabbit hole and nothing is happening.”

He criticized L.A. Metro’s struggles to address homelessness on its trains, saying the agency “essentially handcuffed law enforcement” by deploying security rather than sworn officers and, as a result, the homeless population exploded overnight. The department needs fuller funding to deal with the county’s rising crime, he said.

Luna, meanwhile, called for a “holistic approach” in which the Sheriff’s Department cooperates with local, state and federal partners to find the best solutions instead of fighting over who gets credit. He pledged to put a stop to the “us versus them” culture in the Sheriff’s Department. Luna said that while he doesn’t agree with all of Gascón’s progressive policies, his responsibility as sheriff would be to work with the district attorney chosen by voters.

“You have to collaborate and get along with people,” Luna said. “If somebody doesn’t agree with you, you have to be able to find a middle ground to get the job done.”

Luna said he is open to trying alternative forms of policing, rather than sticking with the “status quo.” The department’s solutions should be data driven, he said.

Asked about L.A. County’s notorious jail system, Luna said the county has to figure out a plan to address mental health, reduce overcrowding and hold employees accountable. “We cannot continue to do the same thing over and over and fail,” Luna said.

“I am depriving them of programming, because I lack the funding, the resources and the staffing,” Villanueva said.

Much of the night’s questions dealt with Villanueva’s clashes with other officials and a laundry list of controversies, including the existence of deputy gangs within the department’s ranks and the recent raid on the home of county Supervisor Sheila Kuehl. The Attorney General’s Office announced this week it would take the Kuehl case from the Sheriff’s Department.

“I strongly agree with the attorney general stripping the sheriff of this investigation, because the sheriff had no business investigating it from the beginning,” Luna said.

In a question about deputy gangs, Villanueva said he had done everything he could do legally to curb such behavior, including firing four officers, suspending 22 and transferring 36 others.

Villanueva often avoided answering certain questions and instead used the opportunity to call out Luna’s own history, pointing to racist messages seen at the Long Beach Police Department and an officer-involved-shooting from the 1990s.

“His job as a puppet is to look the other way,” Villanueva said.